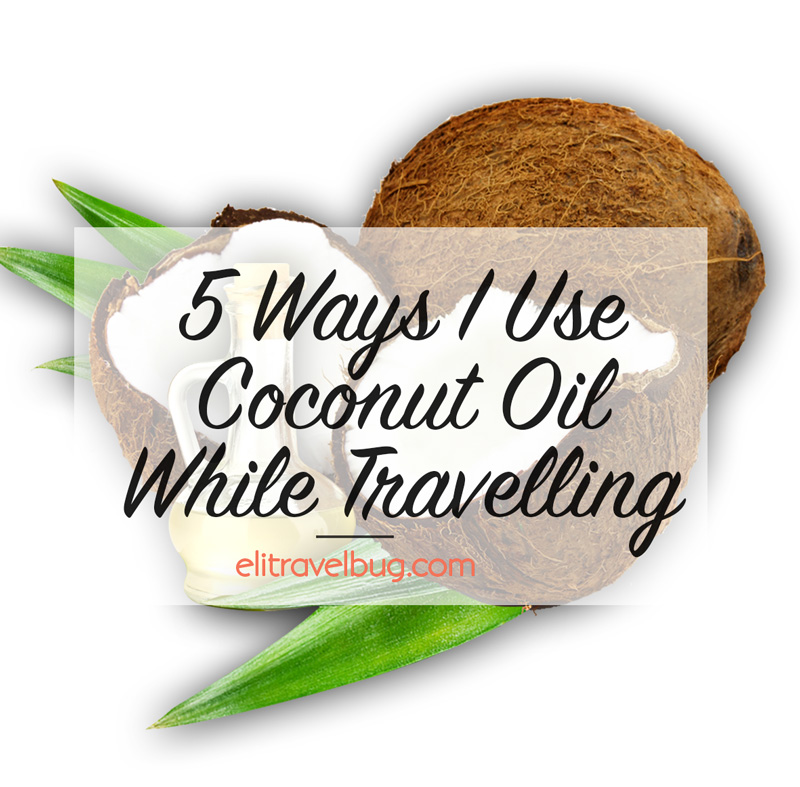 I’ve heard so many ways of using coconut oil before, but to be honest – I thought it’s just one of those things that were ‘in’ at the time..

So, I completely ignored it.

Then I went travelling, with a backpack stocked up in my precious moisturisers, shower gels, conditioner and so on..

Of course, after a while I started running out of my must have skin saviours one by one.. It was impossible to find any of my specific products where I was at the time – Indonesia. I also didn’t want to start spending a ton of money plus risking it by trying out loads of new things.. it would take a while before I found something that didn’t irritate my skin.

I needed a moisturiser the most. So, when I walked past a ‘coconut’ stand at the Ubud market – I had a cheeky look at all of the products and one caught my eye – 100% natural, cold pressed coconut oil.

That’s when the little lightbulb lit up in my head – what could be better than a natural oil – it will surely moisturise and hopefully not irritate as long as there are no chemicals added.

And so my experiments (and obsession) with the coconut oil began.

5 Ways I use Coconut Oil While Travelling

After spending years searching through hundreds of different moisturisers that do not irritate my skin, I cannot believe coconut oil never crossed my mind.

I put a few drops in my hands and use the oil as a normal body moisturiser after having a shower. I try not to put too much on as the clothes can get quite greasy, usually a couple of drops are more than enough and it gets absorbed quickly.

Works perfectly as a leave in or a rinse off conditioner..

Many people get scared just by the thought.. I know, I used to be one of them. However, if you use it well – it’s the best thing out there. I promise.

The oil makes the hair look shinier, healthier, and less.. all over the place.

For Rinsing:
After shampooing put a couple of drops (not too much) in your hands and spread it on the ends of your hair – try not to go too close to the roots as that’s when it will get risky.

Leave in:
When I struggle to brush my hair, I add one or two drops and again, spread it on the ends – usually just concentrating on the bottom half of my hair.

Also, applying it just before going into the sea stops the hair from going frizzy and helps to get the ‘beach look’, but again – keep the amount under control.

YUP. The best idea ever, no joke.

During all the years that I’ve had to get rid of the unwanted hair, I haven’t managed to find a shaving cream that stops the red bumps coming back, especially if I didn’t wait ‘enough’ time in-between the shaves.

So, I didn’t take any when going travelling. Then, of course I was stuck as the shower cream didn’t do much. I thought.. why not give the coconut oil a try.. it’s greasy – so it’ll make the razor less irritable and.. it will moisturise at the same time..

I haven’t used anything else since. I even apply it after as well to give the skin more moisture. If you haven’t tried it.. I give you the permission to finish reading this article after you give this life changer a go.

I will say it straight – I don’t like make-up removers.. I’ve tried hundreds.. there’s honestly nothing out there that wouldn’t irritate or magically make tens of spots appear out of nowhere. So, I’ve only been using make-up wipes, which I know are not the best. Especially not when you want the skin to stay looking younger for longer.. yh yh.

Of course.. coconut oil seems to sort that dilemma out as well.

The best way is to use it with cotton pads, but if that’s not in your backpack.. tissues or toilet paper in worst case scenario will do as well.

I’ve only tried this a couple of times but will definitely carry on to see the results. I thought to myself that instead of buying one of those ‘magical’ toothpastes packed with chemicals that eat your teeth away.. I should give coconut oil a try after reading so much about it.

I mix a little bit with water and rinse my mouth for about a minute, the lauric acid that the oil contains is good for getting rid of plague and bacteria which results in making the teeth yellow. Coconut oil is also meant to be good for your mouth in general – helping the gums to stay healthy and makes the breath fresher.

So here it is.. 5 ways I use coconut oil while travelling.

There are also many other ways to use the oil that I have to yet try out, but if they are worth mentioning – a new post will be coming as soon as!

Note: Even though coconut oil is a natural product that works for many, some may react badly.
Please check on a small area of your skin first before going all out. <3

Hopefully, you found it helpful and it can save you as much space in your backpack/luggage as it does for me.. when backpacking.. every little inch counts.

[…] oil has been my all time favourite. You might have seen my other posts about it, for example: 5 Ways I Use Coconut Oil While Travelling. I use it for so many different things. It’s […]

[…] of the main necessities is coconut oil , I use it as a moisturiser, conditioner, make up remover and so […]