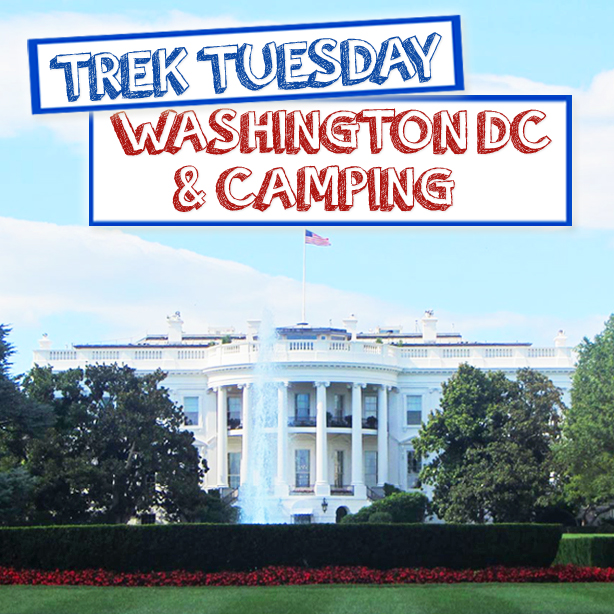 After driving for just about 3 hours from Philadelphia, we arrived at our second stop where we lost our US camping virginity.

Click here if you haven’t read my last weeks post where I talk about the very beginning of our trek.

On the way to Washington, Erin introduced us to Walmart – seems like everyones dream to finally see what it’s all about and whether it’s anywhere as good as people say. It is.

It’s also safe to say that we all got slightly carried away, whether it’s with the pillows, snacks, fizzy drinks or red cups of course. Our first supermarket experience was awesome.

In today’s post I will tell you about the camping experience – was it really as easy as Trek America says? As well as Washington DC 🙂

Setting Up The Camp

Many of us seem to be worried about the camping side of trek america, and most people in our group were the same – some of us have never been camping and some only experienced it at festivals, which let’s be honest.. is completely different – I found that in US you don’t usually wake up in a flooded tent.

The whole group was nicely surprised when we saw the campsite. It was so.. nice! It even had a swimming pool and a hot tub.

Erin showed us how to set up the tents before it got dark and turns out it’s not that hard at all and actually quite quick. We grabbed our sleeping mats and set up the rest of the camp.

Out tour leader has divided us into 3 groups of 4 – Group A, B & C. Everyday each group will get a different task, either cooking, washing the dishes or tidying the van.

I was in group A with Rooney, Shane and Bindu and we cooked the first meal – fajitas. Who knew you can make such delicious food using the camping equipment, it’s fair to say that we set the standards up very high and group B already felt the pressure.. we all liked a bit of competition.

I was worried that it will be a lot of effort cooking and setting everything up but it wasn’t at all, especially having so many people helping out, everything gets done quickly and it’ actually a lot of fun.

As I mentioned last week, my expectations of the capital weren’t too high. Probably not to anyones surprise – turns out it is pretty incredible.

When we got in the van, Erin put even bigger smiles on our faces by giving us loads of glowsticks – red & blue, this way we wouldn’t lose ourselves and.. we can go all out. We then drove to the monuments and went exploring, by that time it was really dark and I found myself wondering if it’ll be any good.

After just a few minutes, Washington DC has already found its place in my heart. Every monument & memorial, one by one has left us more speechless – I could go on trying to explain how and why they were so beautiful but it’s something that you need to experience for yourself.

From the World War II Memorial to the Vietnam Veterans & The Martin Luther King, Jr. Memorials, every single one was absolutely stunning and seeing them at night was an unforgettable experience.

My absolute favourite was the Korean War Veterans Memorial (picture at the end) – I found it the most moving, looking at the realistic face expression of the soldiers makes it impossible not to. The memorial is very lifelike and the way that the soldiers are walking through the field gives it a great sense of reality. I found myself freaked out a few times generally thinking some of them were real people in the darkness. This memorial will leave you humbled and speechless.

We also saw fireflies which made the evening even more memorable, enough said.

After coming back to the campsite, we set up the campfire and got the red cups out. Turns out there was another trek group staying at the same campsite and Erin knew their tour leader, so next thing we know there were about 24 of us playing American drinking games.

The other group was doing the same trek as us (Southern Sun) but started in Los Angeles and were finishing off in Newark – the opposite to us, so it was great to hear their stories and about the favourite places they’ve visited. The whole group seemed so lovely and I just remember how sad they were to be finishing this journey so soon.

We played many different games but I must say that Flip Cup was the absolute winner (pictured above).

Watch this space as I will be writing a post on my favourite American drinking games, including red cups and cards.

The first night camping was everything I could wish for – it was great. We all got to know each other more and we even made smores (super exciting). I was wondering if the next ones could come close at all.

It was the ultimate bonding time, part 1.

First Night Sleeping In The Tent

Mainly due to my allergies, this was my biggest worry. I was scared to wake up the next morning in case I would be covered in a rash, but to my surprise I was absolutely fine. The weather turned out to be the perfect temperature for sleeping in a tent and we weren’t too cold nor too hot, it was perfect. It also wasn’t scary as I though it might be because you know.. all those stories how a bear can visit your tent.. that doesn’t happen unless you’re in the wild.

Waking up in the morning I just thought.. ‘bring on the next 20 nights!’

The next day we went exploring more of the city..

We saw everything from The White House (which in real life seems so much smaller), Lincoln Memorial, Washington Monument and so much more. Every single sight was beautiful and we couldn’t get enough of the photos (some examples at the end).

Erin then said she will get us some lunch and to meet her by the Washington Memorial. When she came back, once again she managed to shock us slightly – from endless amount of food: grilled chicken, fruits, veggies, drinks, even picnic mats (red and blue of course), cutlery etc.

Our first picnic was amazing, especially considering the place where it was happening – beautiful surroundings and incase we forgot.. in Washington DC.

When our bellies were full, we were relaxed and chilled – the exploring continued. Finding it hard to decide what museums we want to go to as the list is pretty incredible making it a difficult choice, we considered the time we had and went with the American History and Space & Air Museum.

I tend to get quite bored at museums but the ones we went for were great, especially the American History one. The very moving display of the original Star Spangled Banner seems to have stuck in my head the most, I still find it hard to believe how huge it was.

Second Night At The Campsite

After the sightseeing and warm weather, we couldn’t wait to enjoy the campsites luxuries. Once we got into the swimming pool, we couldn’t get out for who knows how long, eventually we moved into the hot tub – and what a wise choice that was. Were we still camping?

The second night was probably as good as the first one and we continued playing drinking games, group B cooked and tried pretty well to reach group’s A standards.

Next Stop.. Tennessee and White Water Rafting
(How will I ever do this with my fear of deep water..)

MAKE SURE TO SUBSCRIBE SO YOU DON’T MISS OUT ON FUTURE POSTS!
TUNE IN NEXT WEEK FOR MORE TREK TUESDAY

That’s when we believe we saw Obama.