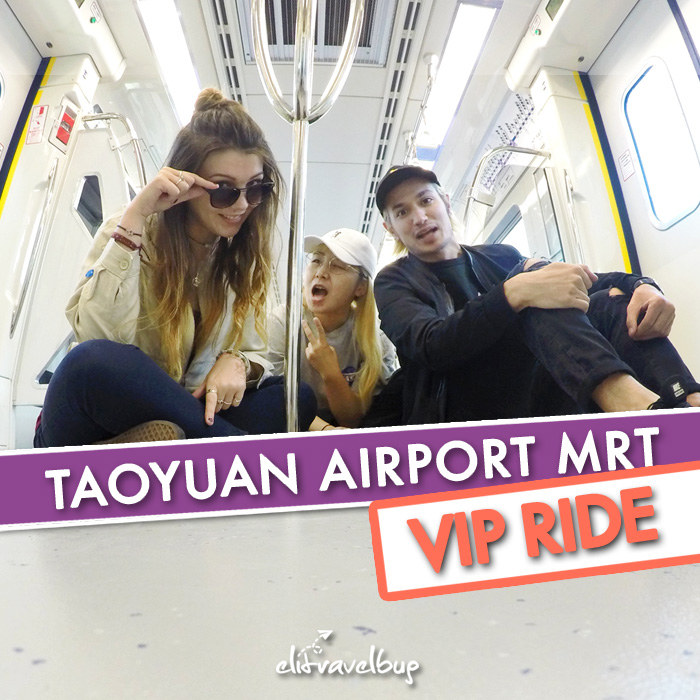 A few groups of individuals were invited to attend the new Taoyuan Airport MRT – VIP RIDE, before the official opening to the public.

Thanks to Stop Kidding Studio – I had the pleasure to be one of the individuals and enjoy the ride!

After approximately twenty years of planning and ten years of construction – a new MRT (metro) line has been created, which connects Taipei City with Taoyuan Airport. This is an extremely big deal for the Taiwanese and Taipei’s transport, which means there were cameras and reporters e v e r y w h e r e.

After this event, we were featured in many Taiwanese news across the internet, such as the video below from the official 桃園大眾捷運 Taoyuan Metro Page :

About the Taoyuan Airport MRT Service

This service includes luggage check in, just like at airports. Once the luggage is checked in, it will be handled for you all the way to the airport. Before I move on, can we just take a moment and appreciate how cool that is?

‘Bags are delivered to airport Terminal Two for x-ray scanning, after which they are directed to the appropriate airline.’ – China Post

Due to the checked luggage, the layout of the train is in the style of standard trains such as the HSR service.

Journey time: 70 minutes, 12 stops from Taipei Main Station to Terminal 1. The train then carries on, meaning there are 21 stops altogether.

The carriages are in the style of a standard MRT train and have a lot more space as there is no check in luggage on this service.

Meeting at Taipei Main Station – A1

We started off with meeting at Taipei Main Station – Exit A1. This is where all of the groups were joined by a guide.The guide we had, spoke great English as our group was mostly foreigners and he was absolutely hilarious.

The guide we had, spoke great English as our group was mostly foreigners and he was just absolutely hilarious in general.

The station is of course, brand new and as mentioned by our guide, designed by a Japanese architect who won the prize for this project.

Start of the Trip – Express Train

After a brief introduction to the station and the new service – we were invited to access the Express Train.

Greeted by the reporters, we found the perfect seats and got comfy. It’s needless to say that the train was spotless, with purple seats and seriously large windows.

Before the train departed, our guide told us more information as well as a few jokes (pretty hilarious tbf). One of the interesting points made was that there is FREE WI-FI on board. Yup.

The trains have TV screens showing flight arrivals and departures, which I thought is a great idea.

We also received a gift each, which was a lucky door hanger (I think) with a NT$ 10 inside. Real NT$ 10 (I checked). Plus a paper train and other stuff including information leaflets.

The views were really nice, nicer than I expected to be honest. Not that I had any expectations, but you know what I mean.

After 35 minutes of train ride, we arrived at the A12 station – Terminal 1.

Due to a short break, we could explore the station a little bit.
The main attraction were the interactive screens. Which in reality, I’m not sure if they really were as we couldn’t figure it out.

It’s not only the screens that have (or don’t have) a special feature. The stereo sound system is pretty decent all around, from which you hear all kinds of sounds depending on what the screens are displaying.

For example.. at one point there were gunshots. As explained by our guide :

“Everytime you walk past the screens during that specific display, you will see your shadow and hear gunshots… Inspired by the Western Style”

Yup.. You’ve read that right. You can see more in my vlog, below.

On the way back, we hopped on the commuter train, which is the slower and cheaper service.

As mentioned above, there is no check in luggage option on this one. Therefore, there is a lot more space in the carriages, for you and the luggage.

Most of us were pretty knackered by that point so we just sat and chatted for a while. Until I was told that our mate: Divyns – who is a musician, is filming a video.

Not thinking twice, we grabbed our stuff and rushed along the train to join him, creating a bit of a chaos – a very fun chaos indeed. You can watch his video below :

This also ended up in the news by the way.

What a great day, with a great bunch of people aka the SKS Family.

I think the Taoyuan Airport MRT service is a great idea and will be extremely helpful for those planning to head for a little holiday and not only.

Both of the services : Express and Commuter are very convenient, comfortable and the views are super nice!

Thank you the 桃園大眾捷運 Taoyuan Airport MRT and Stop Kiddin’ Studio for giving me this opportunity!