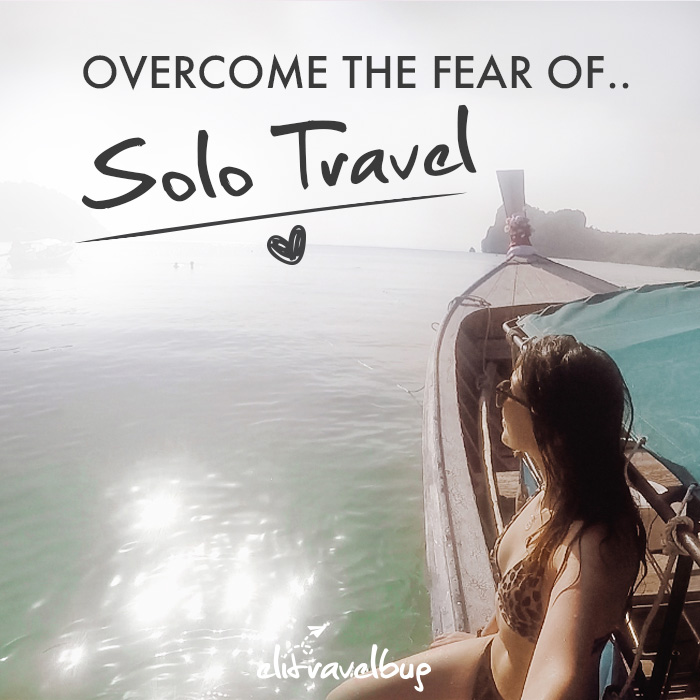 About four years ago, I would’ve probably be way too scared to go and travel solo.

Now, after being abroad for almost two years plus travelling a bit before that, I want to share my thoughts with you on how to overcome the fear of solo travel.

Don’t let the outside world stop you from following the dream.

There are a few reasons why you could be considering to go somewhere on your own..

Whether it’s because your friends are not interested in the same place(s) as you, because they cancelled on you last minute.. or because you simply want to get away – just you and nobody else.

But so often we don’t go ahead with that idea of following our dream.

And there are many reasons why.

Whether your friends find it weird that you want to go by yourself.. whether your parents think it’s too dangerous (yes, even when you’re in your mid-twenties or older)..

..Or simply because you’re scared.
Probably because of all those scary stories that your friends, parents or the main one to blame – THE NEWS (and often, its ridiculous propagandas) have put in our heads.

Overcome the Fear of Solo Travel

We’re living in a time where social media is one of the main sources of inspiration. So, let’s say you’ve got a certain city, country or area in mind.

Somewhere where you’re dreaming of going to so badly that you can’t stop looking it up on Instagram, Pinterest or reading about it in the lonely planet (I get ya by the way).

You’ve seen pictures of people visiting, travelling around those places, you’ve read about their stories and sometimes even watched those YouTube videos.

So if it really was THAT extremely scary, do you think that all those people would really be there as well? I don’t mean the bloggers/Instagrammers who go on all-pre-paid and pre-organised full inclusive tours here. Just normal, standard travellers.

Probably not, and you know that deep down.

The thing is, that wherever you are – there is a certain danger. I grew up in London, where there are deaths, fights and robberies happening non-stop.. to the point where the news barely mention it now.

Even in the small town (or basically a big village) in Poland where I was born – people still think it might be unsafe to walk at night.. and it’s super quiet and small!

Of course, it depends where you want to go to, and some places might be safer than others. But I’ll tell you one thing – having travelled to so many countries, there is only a handful of places that I generally felt unsafe and uncomfortable in.

And the places that I felt the safest in? Were the ones that my family were worried about the most.. because “it’s a third world country..” or “because I won’t have much to eat” and “how am I going to get from A to B, how will I communicate..” how this and how that..

I travelled solo in two continents – Europe and Asia. As Europe is where I’m from, it seemed that everybody around me was worried about Asia a lot more.. and guess what?

I felt SO much more comfortable in Asia than I did in some of the European countries.

Now, to give you an example..

The first place in Asia I was really alone was Bali. For those that have travelled solo quite a bit, it’s such an OBVIOUS place to go to and an absolute piece of cake.

It’s touristy, easy to navigate, super easy to communicate with the people.. There is an endless number of super friendly travellers who invite you out for food with them or day tours.. plus there are western restaurants, shops and anything you can think of.

For someone that’s never been anywhere by themselves completely – it might sound seriously scary, because of all those ‘what if’s’ that we’ve been constantly asked by others and now it’s impossible to get it out of our head.

Will it be easy to get from one place to another? How will I meet other travellers? How will I communicate with anyone out there? What if it will be seriously scary?! I don’t speak the language, I DON’T KNOW ANYONE OUT THERE.

Can you see the contrast here?

Just a standard boat journey in Thailand. As you can see, most of the people here are travellers <3

What I’m trying to say is, don’t let the scary thoughts stop you from following that dream.

No matter what the reason is. Follow your heart and your intuition..

Of course, there might be some serious reasons why you shouldn’t be going to certain places as of course there are different events happening around the globe which might not necessarily be safe..  But, if the reasons are such as the ones I’ve mentioned above.. please do think about it again.

Chilling with the most incredible locals. Btw, you might recognise Ei Ei from one of Nas Daily’s videos <3

Many backpackers decide to start their journey in South East Asia – and one of the obvious countries is Thailand. Because of that, I truly wasn’t interested in going there except seeing a small part in the north.

In my opinion, Thailand is one of the best places to start the big adventure.
(And not only to start).

The reason why I was quite against going there was that it felt like half of London has already been. It seemed like everywhere I went in London I heard people talking about Koh Phi Phi and the Full Moon party.

I wasn’t really interested in that kind of vibe. I was going on a ‘soul journey’ and felt like the Full Moon might do the opposite of what I was looking for.

(Oh yh. Ermm.. I might have possibly attended it in the end tho).

But trust me.. from the first minute in Thailand, as soon as I stepped off the plain – I was already falling in love with the place.

I decided to travel a little bit as well as volunteering and visiting my Thai friend in a place where foreigners were not in sight. And I did not want to leave. For real.

I also met a group of incredible human beings within the first couple of hours in Thailand – in my hostel dorm. Plus the country is extremely easy to travel around, to communicate and to meet other travellers.

I then went back there two more times. I call it my Asian home.

After the obvious choices: Bali and Thailand, I carried on to Myanmar, Malaysia, Hong Kong, South Korea, Philippines and Taiwan – where I lived for almost a year.

Over those 18 months, I have met the most incredible people, who have quite literally helped me be who I am today.
I’ve learned things which I would have never learn in school or university.
I’ve experienced situations that exceeded any expectations.

I’ve learned how to be free.
And how to feel free.

If two years ago someone would’ve told me that what was waiting for me in the following months, I would not have hesitated one bit. Especially when it comes to fear.

This was the best experience of my life.
Plus, the best & biggest lesson I could have ever wished for.

So if you really do worry about going solo.. don’t feel ashamed by considering one of the obvious choices such as Thailand or Indonesia. There is a reason for why it is an obvious choice in the end.

And once you get comfortable and realize that travelling solo is not as scary as we’re being led to believe – you’ll be heading off to all those other dreamy places from your bucket list.

I truly hope this can help you to overcome the fear of solo travel, even just a little bit <3

Oh and truuuust me, meeting people while travelling is seriously much easier than you think. Unless you’re in a dessert somewhere. With no people whatsoever.

Here are my posts on my very first solo trip:

And here is the very first ‘video’ I did from my solo travels in Cinque Terre – a place that I’ve been dreaming of visiting but the only thing stopping me was the fear of going on my own.. BUT I DID.

And it was insane.

The video is only 15 seconds long btw, still from the time when Instagram would allow only that:

Oh yes, solo travel honestly seems to welcome you with a lot more unexpected things, as we tend to be so much more open to new opportunities. Such as this one below..

Volunteering is also a great way of experiencing travel. Not only you feel more comfortable to start with as you know where you’re bed will be for the upcoming time. It also allows you to give back to the community in a beautiful way.

Ok, that’s enough of me rambling. Please let me know if there is anything that I’ve mentioned (or not) that you’d like to know more about <3

Pin me for later: