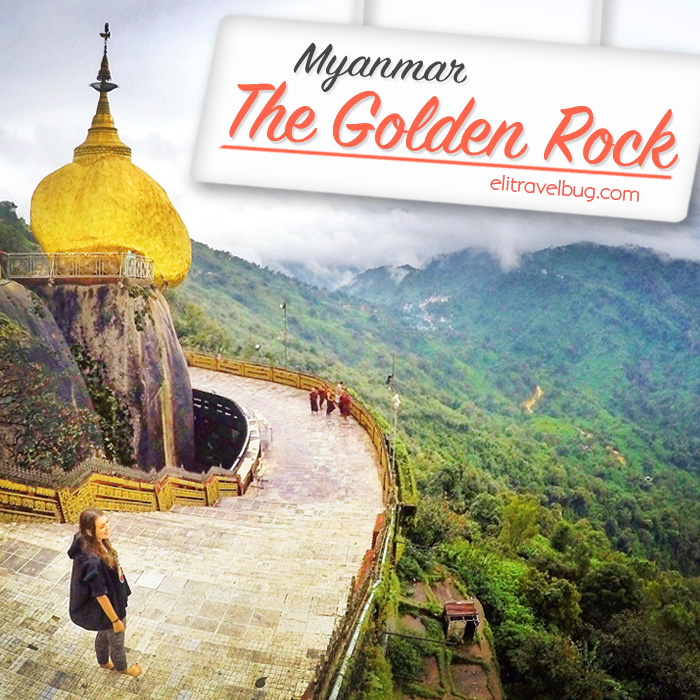 One of the three main religious sites in Myanmar is the Kyaiktiyo Pagoda known more as the Golden Rock.

It’s also a well known pilgrimage destination. Believed by many that the rock is standing on a strand of the Buddha’s hair, being so powerful that just a glimpse at it can inspire you to become a Buddhism believer.

Kyaiktiyo Pagoda aka The Golden Rock

If you are lucky enough and don’t have many clouds in sight – the landscapes from the top of the mountain will be neverending and absolutely mindblowing.

If you are a male, you can feel special as you’re the only ones who can make a donation and add a golden leaf to the rock, where as women.. well, can stand on the side and only watch – we are not allowed to touch the rock.

I would actually like to use this section to express my sours – I was quite upset to be perfectly honest with you. I do understand, of course (or do I?). But at the same time, I couldn’t help but to be slightly bummed that not only I couldn’t touch the rock – I couldn’t enter the best viewpoint or other interesting spots due to these signs either:

Concentrating on the positives, I watched my male friend happily enter the cool spots and selfing away while I put my head down trying to be ‘understanding’ and went to search for another ‘perfect selfie’ area.

Anyway, let’s start from the beginning.

As you might have read in my previous post :
Hello Burma / Myanmar
After landing at Yangoon airport, we headed straight to Kin Pun.

Here are all the details about our
Golden Rock / Kin Pun trip:

Bus
Destination: Yangoon Highway Station to Kiyajito
Price: 10k Kyats each (around £6)
Time: About 6 hours
Comfort – Preeeetty decent! Plus we got a bottle of water & a refreshing towel each

Truck Taxi
Destination: Kiyajito to Kin Pun
Price: 2.5k Kyats (£1.50) each
Time: Roughly 20 mins
Comfort: Well.. it was literally the back of a truck so go figure.

The bus journey went pretty quickly and we had a 30 mins stop for food, toilet and whatever you need to do.

We tried to get some fruits or snacks but were convinced that every single stand was trying to slightly rip us off, consulting between one another, smiling and giving us ‘their offer’. Trying our best to bargain – they were not giving in, so trying to be strong, we ended up snack-less.
I couldn’t help but laugh at the whole situation, while trying to figure out a way to get the local deals.

Then we realised that actually.. most of them were the real prices. Whoops.

When we arrived in Kyijaito, it was already dark so finding transport to Kin Pun was proving slightly tricky – every person asked offered us a motorbike taxi which was about 3-5k each, stating that there are no cars or taxis.

Bargain hunters as we are, we decided to keep searching. It took us a couple of minutes to find a group of locals seating by a track offering us a ride – original offer was about 10k kyats but the deal was made : down to 5k (£3) for both of us – winnings.

Source: Agoda {Click on the image for more info}

I have pre-booked a twin room on Agoda.com for the first night, we then extended for one more day for slightly cheaper as there were no online fees applied – 20k (£12) for two people.

The room was really nice, breakfast was simple but everything that you need including coffee. The location of the guesthouse was 5-10 mins from the Kin Pun bus station and the truck transport to the Golden Rock, which was perfect.

Also, don’t let the above picture of the Golden Rock mislead you, yes you can see it from the hotel. But, it takes a while to get there still!

Track to the top of the mountain
Price: 5k (£3) round trip

This was probably my favourite part of this particular trip, it’s literally a truck absolutely packed with people – but it was great.

Arriving at one of the trucks, we were convinced there is absolutely no way of getting into that specific one as it was completely full. However, the people working there took no time and straight away told the passengers to make some space and guided us to quicky sit down – not sure how they did it but somehow there was a bit of space for two more people.

Surprised and baffled, we sat down while every – single – person looked at us withba huge surprise & smile on their face – I quickly realised we were the only foreigners in the truck – my extremely pale skin and Tinos super blue eyes made us stand out drastically.

The views were unbelievable and if you are scared of heights, be prepared as the turns are crazy while the height is great. Still, not enough to stop anyone from doing it! It was incredible.

Make sure you bring a poncho with you – we ended up driving in the clouds and my cheap Primark raincoat wasn’t enough – I did however, find one at the truck station and might have taken it just in case, glad I did for sure.

My first experience with the exclusive ‘foreigner sign’, wasn’t sure whether we should be annoyed, outraged or laugh about it.

We paid and laughed.

The weather wasn’t the greatest and when we got to the top – clouds were blocking the views completely making the rock seem like it’s almost floating above a cotton candyfloss.

But we had time, plus the determination. So we waited patiently for it to clear up.
After a substantial amount of rain, getting completely soaked and trying to find some shelter – it cleared up and we headed back to the view point.

The plus side to a bad weather is that the people run away, leaving us to be pretty much the only ones at the top. Whoop.

The clouds cleared away and we went crazy with the pictures (after I got over the ‘no ladies allowed’ sign, that is).

We were lucky to see this group on Monks admiring the beauty just like we were.

We then headed down towards the ‘bus stop’.
While walking past a hotel restaurant – it started raining like crazy once again. The hotel looking slightly over our budget range, that was a no brainer, but we had time to kill plus I was shivering from all the rain & cold mountain air. We quickly considered the views and the idea of a warm cup of tea – “f**k it, let’s go”.

And yes, it was super expensive & we were slowly realising it while being escorted by a waitress dressed in a top notch uniform. The table setting was certainly out of my comfort zone, one of those 2/3 forks, spoons & knives you know.. I sat down feeling completely out of place in my drained clothes and ripped poncho.

Straight away we mentioned that a cup of tea is all we want and if that’s ok. They said yes but the only tea available was just a standard black which apparently was not something that Tino was craving for.. so they offered us green tea instead which is ‘on the house’.

So to sum it up, we had a nice, warm shelter, free (delicious) green tea with the the view of clouds beneath us, at no charge. Surprised, plus slightly ashamed, we walked out thanking the waitresses for the hospitality. They smiled and waved goodbye.

Tip: If you want to do the same (which by the way you totally should) the hotel is about half way between the pagoda and the ‘bus stop’. I don’t remember the name but it was on the left.

Realising we missed our bus, we went for another cup of tea / coffee. Ending up in a simple bar where the locals were intense-fully watching a boxing match on TV.

We sat down and I smiled to myself thinking how much more I (surprisingly) prefer this place, enjoying a super simple and tasty ready mix cup of coffee.

At the time, the truck was running every hour.

The Golden Rock is definitely a must see, especially if you are not very restricted time wise. Even the truck ride itself was one to remember and completely worth the price and the slightly sh***y weather!

Next stop: Hpa An
(plus Hiking Mountain Zwegabin & staying overnight at the monastery)

Visited Myanmar last year but never made my way to Golden Rock – my thoughts were “it’s a rock that’s painted gold. I think it’ll be okay to give that a miss”.
Looks like I may have underestimated the place. Heading back for Christmas and New Years to visit my parents (they just moved there) so I’ve got a second chance to check it out!

Also – burmese local transportation is the best hahaha. I remember sitting in one of those trucks, good fun.

Hi Caroline!
That is pretty much exactly what I was thinking! I’d say if you have time then its worth it, but I wouldn’t worry too much if not.
Ah lucky you! You’ll have so much fun im sure. And yes – the transportation was the best part of this haha! xx

That transportation looks like tons of fun! Maybe a bit more fun without the rain though 😛
It certainly sounds frustrating not to be let into a place due to being female. It’s a cultural experience that really makes women contemplate their place within different societies.
Great read. Thanks for sharing 🙂

Hey Brianna!
Completely agree! It’s best to just try and accept the cultural differences and enjoy the experience as much as you can! 🙂 xx

I really want to travel around Myanmar.. how much time do you think is good? Will you write about all of the places? I am also a little scared about going by myself..

Hello Sarah!
I had 3 weeks, first check what visa you’re eligible for – many countries can get about 30 days. I think that’s enough, but saying that – there is still more that I’d like to see!
I will try to write about all, or at least most of the places I visited 🙂
I actually felt really safe in Myanmar (although it took me about 2 days to get used to it) – the big plus to travel with someone is when sharing the accommodation – there aren’t many hostels.
Hope this helps! xx

Eli! Thank you! You are so helpful, i really want to go and hope more of your stories will inspire me even more and give me the kick to book the trip. can’t wait to read them. Love, Sarah!