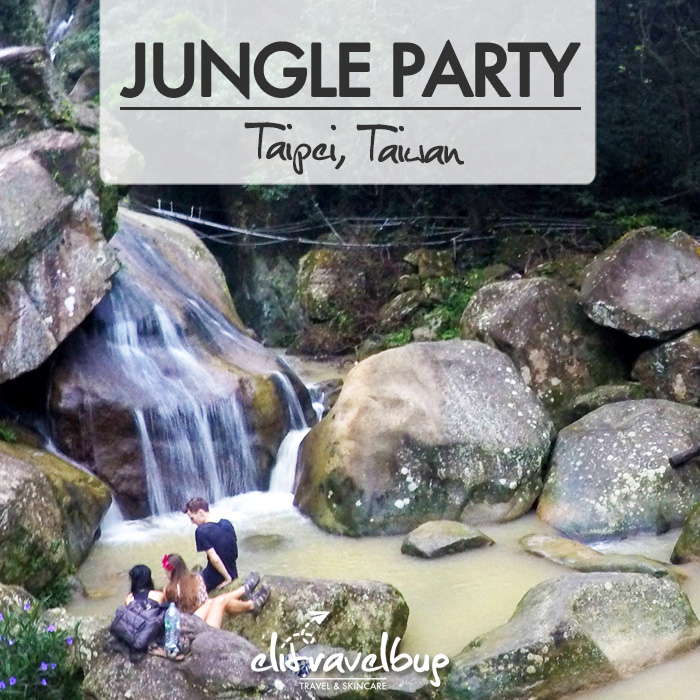 Imagine hiking through a jungle in the darkness, following a flashlight and sound of the river.
Then you join an incredible (almost secret) community – where people gather to let loose, have fun & celebrate what the life has given them – from the environment to friends & strangers that will soon become family. A jungle party..

No judgements, no uncomfortable feelings – everybody is there to purely enjoy themselves.
Incredible music, people, surroundings & the most magical atmosphere.

Definitely not your standard party.
It’s a gathering ‘for the people created by the people’ aka participants & the incredible organisers.

The above are just a few of the things that make this event happen.
The jungle party is one of the most unique & seriously inspiring events I’ve experienced.

Hidden in the jungle just outside of Taipei – right by the waterfall, surrounded by nothing but nature, it’s hard to imagine a better location.

Saying that, it does change and the event has taken place in different spots in the past.

Inspired by the Burning Man – a Festival that plays a big role in the lives of those who have had a chance to attend, you will see some similarities between the two.

The Jungle Party has it’s own set of principles that allow the event to exist. Some of which you already read above.

What is honestly unique about the jungle party is the ‘non-commercial’ side of it..

..Other than the facebook event created – there is nothing out there. To the point where I wasn’t sure, whether writing this post is a good idea.

It is also non-profit. The organisers are simply doing it for the experience, not for $$. You can however, donate towards the hard work put by the organisers and things such as electricity etc.

Both of the above points are seriously rare these days, especially when it comes to events.

This is the main reason why I decided to go ahead and write this post.

I believe that events like the Jungle Party itself can make our world a nicer place, it’s possible and it’s us who can make a difference.

Jungle Party Principles:
(taken from the event itself)

Co-create
The Jungle Party seeks to transcend the traditional method of entertainment creation, whereby one provides, and profits from the masses. Instead we co-create. The event is comprised of the individual elements people bring to share and give. The event is thus an immersive experience that is the result of many people’s creative input.

Participate
In order to create such an event, each person involved or attending is encouraged to immerse themselves and get involved in as many ways as possible. Whether it be through bringing something to surprise people, fill peoples bellies, or inspire emotion, we hope everybody contributes in one way or another.

This way the event becomes full of diverse activities and immersive experiences that help people to be present within the time, space and place.

Engage
Alongside participation comes engagement. It’s about the interaction between people, old friends and new. Jungle Party People are family, and as such welcome all newcomers with open arms and an open heart. This means taking an inclusive approach to planning and decision making. Jungle Party is created by the people, for the people.

Self Expression
People are inherently beautiful, especially when they’re given a chance to shine. Jungle Party is a space where people can feel comfortable and safe to showcase their inner beauty. People are encouraged to show their creative side, in anyway they can imagine: costumes, artwork, movement, performance, workshops, it’s all apart of creative expression.

Respect to all
With creative expression comes vulnerability. When we expose our inner creative beings we are sharing something very close and dear to ourselves. As such, everyone has the responsibility to create a supportive and safe environment. This means respecting others and oneself above all else. Actions impinging on others happiness and expression will not be tolerated and will be dealt with swiftly. Remember, it can be dangerous in the Jungle. Squish is sexy…. Just like Concent.

Leave no Trace
Jungle Party People have a strong awareness that we are all an integral part of nature’s ecosystem, and that it is this very system that supports us. As such, leaving no trace is the only way to hold events in pristine natural areas. Following the old saying, “Leave only footprints, Take only memories”, each participant is responsible for picking up any waste that is produced, and ensuring that the site is returned to an even better condition than when it was found.

De-Commercialisation
In today’s society there is so much focus on monetary gain and material wealth that often times we forget what’s really important. Connection. Love. Compassion. Weirdness. Jungle Party aims to create an environment that has as minimal a focus on money as possible. There are obviously expenses that go into creating such an event, but we aspire to keep these as minimal as possible by reaching out to community members, avoiding solicitation and profiteering. If we all give, no one has to pay.

Gifting
Such a de-commercialised environment leaves space to explore other ways of connecting and sharing with people. One way we can do this is through Gifting. Gifting goes beyond the idea of simple bartering and trading. People give simply because it feels good to do so. Whether it be something yummy, beautiful, or inspiring. Giving is the greatest gift of all.

Wanting to help out, I volunteered to be a ‘gate-keeper’. This meant that for a couple of hours, together with another participant – we welcomed the peeps joining the jungle party.

During the two hours, I saw an outstanding amount of drinks & snacks carried through the ‘entrance bridge’. Plus anything you can imagine from signs, circus equipment and gadgets to ‘marshmallow’ clouds (that I still need to find out how on earth were they made) – the event was dancing with creativity.

I was honestly amazed by how many people really did contribute to the gathering.

We arrived around 7pm – we tried to help out a little before the rest of the participants joined and my friend created signs to remind everyone about the ‘NO-TRACE’ rule, which we placed around.

I also had a chance to walk around and get the feel of all of the unbelievably hard work that has been put into organising the whole event.

Incredible music, people, surroundings & the most magical atmosphere.
Hearing a sound of the river that led you there in the first place..

Then, it’s already sunrise and you look around..
Realising you’ve danced, laughed and chatted through the whole night already.

But you’re still going strong from the endorphins filling every part of the body.

And the river you’re hearing..? It’s a freaking waterfall, right next to you.

Now, this is what you call a Jungle Party.

I would love it if you could share this ♥

oh wow
is this still happening in taipei?

And yes, it is. But not regularly!