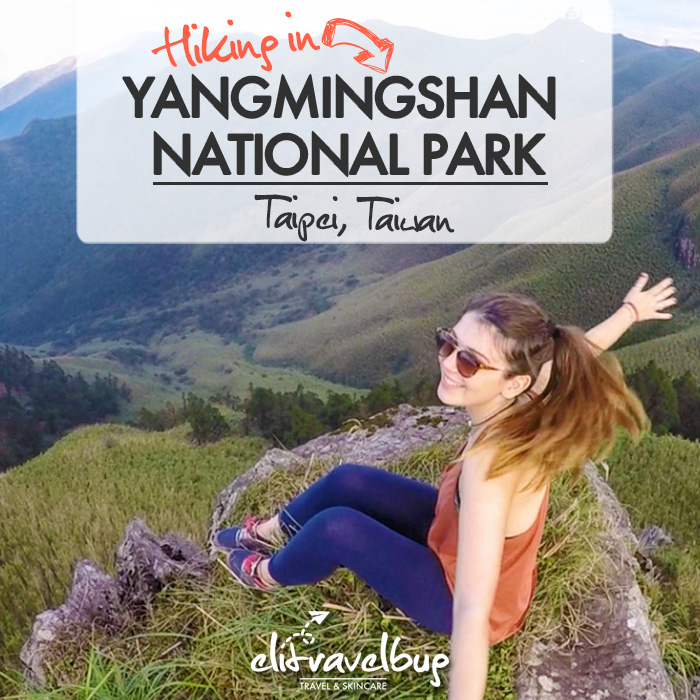 Taiwan is one of those places with endless possibilities for exploring. One minute you can be sipping coffee in the city of Taipei and within half an hour hiking the beautiful mountains. Yangmingshan National Park is a preeeeetty good start.

One Saturday my friend Joanna suggested we hike to the Xiaoguanyin West Peak.

Casually leaving at around 11am we took a bus and within 40 minutes were in the Yangmingshan National Park.

Straight away, the views caught me off guard.

How to get to Yangmingshan National Park

Get off at the Metropolitan Transport Corporation Yangming Mountain.
Time: Approx 40 mins with no traffic. On the way back it took over 1.30 mins during rush hour.

Once in Yangmingshan National Park

There is tons to do there, and Mount Xiaoguanyin is only one tiny part.
(I am hoping to explore much more of the park including the springs and other mountains so stay tuned).

Depending on where you wish to go to next, there are many shuttles available.

Shuttle Bus 108 to Saddle Zhan, then walk from there to the peak of Mount Xiaoguanyin.

However, due to the huge queues (see the vlog at the end) after 5 minutes of waiting we decided to walk.. or hitchhike.

Straight away – arms out, thumbs up,  Joanna went for it.
Turns out she didn’t really consider walking in the first place.

I’ve never hitchhiked before.. but wanted to try for a long time – however, the bravery wasn’t there just yet.

Now, I knew that if I want to give it a go – Taiwan is the place to do it.

Voted as one of the safest countries on earth, I’ve never felt unsafe walking on the streets at night. (Sometimes, I even purposely take smaller alley ways in order to explore the city a little bit more in-depth, but shh..)

Anyway, this time I didn’t have time to think about bravery.

After debating for a few seconds, I tried to follow Joannas steps, but couldn’t stop but feel slightly.. uneasy..? Or maybe slightly embarrassed.

I knew, there is absolutely no reason to feel like that and I wanted to be as confident as my hiking buddy but by the time I managed to put my thoughts into practice – A van pulled up.

Two really nice gentleman’s – one in his 50’s and one in mid 20’s maybe (saying that, I am the worst at guessing ages). They asked where we were going and with our absolutely no ability to speak Chinese – Joanna managed to get us a ride.

They dropped us off about half way through to where the shuttle was meant to take us. They were going a different way after that – at least that’s what we managed to understand with our impressive 2 words based Chinese.

We didn’t mind at all.

Especially when walking above a river which was floating through giant rocks and admiring the most stunning flower fields of (I think) cherry blossoms. Super nice, old, brick bridge and endless sights of mountains and incredible nature.

We walked on the road, past Xiaoyoukeng – a post-volcanic geological landscape area. We saw sulphurous gas & steam coming out from the ground surrounded by the brilliant landscape. Seriously cool.

After admiring it for a little while, we carried on walking.

Getting higher and slightly confused with which way to turn to, we looked at our maps – the arrow pointed towards a massive gate.

A gate with maybe 6 or 7 dogs behind.

It didn’t take long to set the dogs off, starting to bark like crazy, we questioned the way. Let me tell you that the dogs were not exactly small either.. most unchained too.

We walked into a local restaurant right next to the gate and asked locals for directions. Their answer was along the lines of : “No, no, no!! Very, Veeeeeeeery far!!” (what a shocker).

We politely smiled and asked again and the super nice old man pointed at the gate and put his hands in the air.

We considered it for a bit and then I asked him if they bite. The man nodded his head and said “maybe, yes”.

I considered it once again, but Joanna being the sensible one took out her phone and changed the Google Maps to Maps Me – that’s where we saw what seemed like a secret hike path :

Maps Me – Is a seriously good maps app. Plus, this wasn’t the first time it proved to be a lot more specific than other apps.

It’s great for travelling especially as you can download a map of a specific country/area, which can be used later on, even without any data.

If you do not have Maps.me
(which you totally should btw)
Here is the nearest point to the path using Google maps :
大屯山鞍部停車場 252, Taiwan, Taipei City, Beitou District, 三芝區示範公墓
Click

We took the small pathway towards the mountain and started the hike.

Now, to be completely honest with you – originally I wanted to do a detailed guide for the route.

However, because we ended up taking a route that definitely wasn’t the standard one, with pretty much no signs whatsoever.. The only thing leading the way were little pieces of red and white fabric hanging down the branches every now and then and Maps.me.

So, I don’t actually know myself how we ended up where we did.

I can, however show you some pictures and tell you how not so easy, but also how absolutely mind blowing the hike was.

Pretty much from the very beginning, the path was seriously steep but definitely doable. Using the big rocks as ‘steps’ we found it slightly challenging but definitely more fun.

Joanna, in fact decided to wear her sandals – she is a hiking pro, but still.

Where as I managed to slip a decent amount of times in my running shoes with a grip hundred times better than Joanna’s non-existing one.

After hiking for about 20 mins, we got to the bamboo forest where the real fun began.

Having to grab the strong bamboo branches in order to pull ourselves up due to the steepness, as well as trying to get the other branches out of the way – It was some serious fun right there.

When we got to what possibly could have been half way up – the views shushed our constant chatter straight away.

We carried on, anticipating the final stretch of the hike, but also the excitement for the upcoming views was growing.

Arriving at a flat point we assumed we made it, but after going slightly crazy with pictures.
We noticed another small path.

We carried on and then, finally reached the top.

Now, this one was a capital WOW.

The hike up took roughly about 2 hours including a few stops for pictures etc. We definitely were not in a rush and wanted to enjoy the views rather than reaching the top as soon as possible.

I would however, recommend you try to get back before sunset due to the steepness and unpredictability of the trails.

We took a different trail on the way down which at some points was even steeper than the one up, but was much faster.

Yangmingshan National Park is famous for its venomous snakes, so incase you feel like wandering off into scrub land – please be careful.

Check out my (first) vlog here :

Hope you enjoyed my :
Guide to Hiking in Yangmingshan National Park – Taipei !

PS. Please let me know if you found it useful at all!

PPS. If you did find it useful, I would love it if you could share! <3

In which month did you visit?

Hi Leonard,
We visited in November 🙂

Hi Eli,
Your review is inspirited me to do it by myself in Dec. A big worry about winter time and alone. Do you think that I can make it work?

Hello Quynh!
This makes me so happy! 🙂
Doing it by yourself is definitely fine, just use maps.me (download the area in advance).
When it comes to December, it might be a bit cold especially higher up the mountains, I guess you’ll just have to see what the weather will be like! 🙂 xx

I may have to come over to Taiwan soon after reading these posts!! The vlog made this place look amazing too. When do you plan to be there until? xx

You honestly are making me want to visit Taiwan.
I never really thought about it before you started mentioning it on your Instagram and on here..
One more for the BUCKET LIST

Hey Cat!
It really is beautiful, so much nature around! Taiwan is like a little hidden secret place 🙂 xx