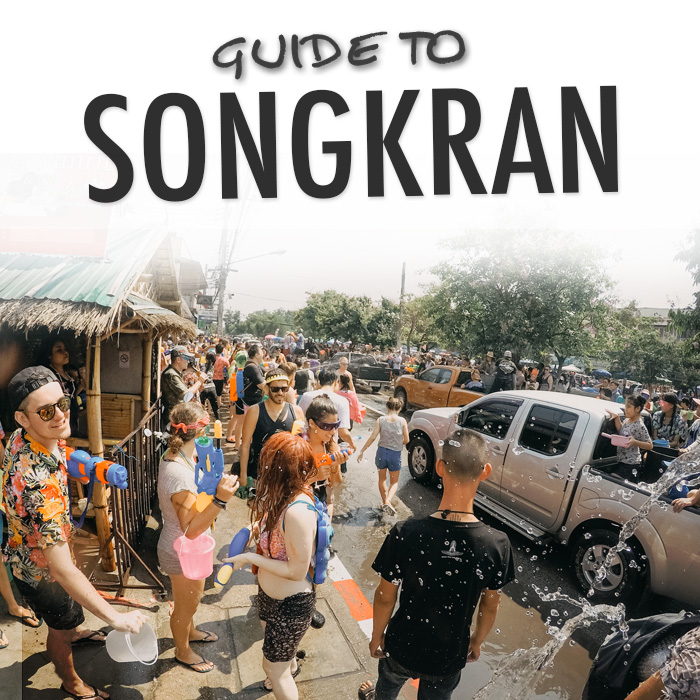 Guide to SONGKRAN.. aka The Biggest Water Fight IN THE WORLD.

You might have heard of the Thai (and it’s neighbours) New Years tradition.. but if you haven’t, then get ready because you’re about to add a HUGE one to your (most likely always growing) bucket list.

Where do I even start?
Besides that, this event is absolutely INSANE.

You might have seen my Songkran video from 2017 (click below), which to be completely honest with you.. I’ve seen way more times than you’d think. And every single time I watch it, I get the biggest smile and goosebumps all over.

Songkran is an annual festival in Thailand (and its neighbouring countries) which happens in April. Simply put – it’s a Thai New Year, which is also known as the biggest water fight in the world.

The festival is officially 3 days long, but don’t get fooled. I’d say it’s more like a week.

You’re probably wondering why would people throw water on one another for New Years, well this is where it gets interesting.

Songkran started off as a Buddhist tradition where people would sprinkle water on each other to end the previous year by symbolically rejuvenate and cleanse their bodies & souls, preparing for good fortune in the new upcoming year.

The actual name ‘Songkran’ comes from Sanskrit work: saṃkrānti which translates to “astrological passage”. To me, it has a beautiful meaning as it literally means transformation or change.

Expect parades, dancing, singing, drinking, water guns, barrels of ice water, buckets, hose pipes and anything you can get as much water in as possible.

Oh yeah, don’t forget to look up too when walking around. Water might be falling from unexpected rooftops and balconies too.

You will see tuck tucks carrying tourists armed with water guns and trucks filled with barrels of ice water with the locals who will be chucking it on you.

Buy my absolute favorite part of this? Is the endless smiles everywhere you look.

Thai people in general, are the nicest people I’ve ever met. But this holiday brings even more happiness and love out of them, yes – it really is possible.

They will greet and include you in their celebrations, treating you like family.

The holiday isn’t only water fights, however. It is rich with traditions such as local people visiting the temples first thing in the morning where food is offered to the monks.

You will also see people pouring water over Buddha statues (then on you too) which is a rich and iconic ritual during the celebrations.

Where is it best to celebrate?

Songkran became a festival which is celebrated all over the country. I celebrated in Chiang Mai, where it is known to be the best and most ‘crazy’ like.

From what I’ve experienced and heard from others who visited other parts of the country during the festivities – Chian Mai really might be the best bet.

It is based around the moat (the center part of the city), best to start at Tha Pae Gate and go from there. It is basically 4km of water fights with parades, huge sound systems and street stalls selling all any water equipment you may possibly need.

There are also parties at every corner. Actually, what am I saying.. it’s one huge party in general. With people dancing around the streets & outside of the bars and teams going at each other from opposite sides of the road.

Oh yeah, don’t be surprised to see kids (and adults too) collecting water from the actual moat and chucking it right at ya.

Other popular locations to experience Songkran are: Bangkok, Phuket, Pattaya and I’ve also heard that Koh Samui is meant to be good as it’s not as crowded.

You will also see people IN the actual moat.

Good to know before..

When I visited, the celebrations started a day before and they go on for about a week. So expect a lot of water.

No water after 6pm (in Chiang Mai)

We were told to not ‘water fight’ after 6pm if I remember correctly (?). So you can feel (mostly but still not 100%) comfortable in your ‘going out’ and not looking drained clothes.

I’m not sure about other locations, but as Chiang Mai has it’s famous night markets – the whole atmosphere gets a lot calmer in the evening.

Then people get out to party further on but usually with no water (in general).

April is the hottest month in Thailand, so water is actually extremely welcomed.

However, when I visited, it actually rained a bit. That plus days of non-stop water fighting and having the absolute time of our lives, has left us preeeetty dead and the rain made it a bit chilly too.

You might want to consider some (proper) raincoats or ponchos, although that might not do much hah!

And I mean it. I would not recommend you stepping outside of your accommodation until everything you’re carrying is completely waterproofed. Especially if you’re staying within a close proximity to the centre.

To give you an idea, you can see in my video that as soon as we stepped out of our hostel, we were soaked within literally seconds.

You can get waterproof phone protectors/cases everywhere you go as well as 7-elevens for really cheap. They’re on a string so can be hanging on your neck and are also ok to use with touchscreens = phone camera on hand.

I would also recommend bringing a waterproof bag or backpack if you need to carry some stuff with you – however, ideally, I’d suggest to not bring anything at all. Except for your water gun of course.

If you’re like me though and end up carrying a GoPro, water (drinkable) and other things, I recommend a Kenken backpack which I had myself. The backpack is water resistant and also dries super fast.

I’ve had one of these phone cases (click here) which are great for touchscreen and a camera on hand.

A bigger pouch for other stuff such as money etc (click here).

You can also get a waterproof bumbag (click here).

This is one of the very few times that I’ve booked my hostel ahead of time.

Songkran is extremely popular and the accommodation gets booked up quickly. It’s not just by foreigners – Thai people also come visit certain cities for the celebrations!

Even though it seems that everyone throws water at one another, there is an exception with Buddhist monks, police officers (and other officials). Although to be honest with you, I’ve had water throwing at me by a policeman too!

Also, be careful with babies, toddlers and the elderly – just don’t be too crazy and don’t go overboard.

Where to buy water guns/buckets

People get real serious about their equipment during Songkran, but after spending a lot of money on water guns which kept breaking – I stuck with a bucket in the end. It’s a lot easier and quicker to fill up.

And let me tell you, being quick is the key.

Watch out for prices as they go up a lot. I’d recommend you having a look around and making your purchases on the outskirts of the party rather than right in the zone of craziness. Prices can go up by 4/5 times even.

If you want to buy a water gun, I’d suggest you get a better quality one which might be slightly more expensive but it’ll work out much cheaper in the end, saving you many different purchases.

Where to get the water from

The locals bring barrels with hose pipes outside their houses, restaurants and bars and are more than happy to share with you.

I always made sure to thank them for it, especially that sometimes some people would try to ‘charge’ for filling up the buckets.

You will most likely see tourists walking around in bikinis, but I would honestly recommend you not to do that. I truly believe in respecting other traditions, especially if we are visiting a country that has them.

You wouldn’t necessarily see Thai people walking around in bikinis, so we should try to do the same 🙂

Definitely, wear a bikini/swimming shorts underneath, but put something on top. I ended up wearing thin vests or playsuits which dried quickly but at the same time weren’t seethrough.

Shoes wise – sandals over flip-flops as those slip off way too easily!

What else do I need to bring?

Songkran is full of happiness and love. However, there are also many accidents happening during this time due to drunk driving, especially when on the wet roads.

Please consider the below points:

➭ Don’t throw water at drivers
➭ Don’t drink and drive
➭ Be careful when on the road
➭ And most importantly, remember that this is meant to be FUN.

Don’t go overboard or annoyed with others when they drain you with water in an unexpected moment, this is the tradition and you are in Thailand for that reason exactly.

If not, it’s better to visit at a different time! 🙂

Thank you for reading my Guide to Songkran (Chiang Mai, Thailand) and as I mentioned earlier, if you have a chance to experience SONGKRAN, DO NOT HESITATE ONE BIT.

I think I’ve already showed you how much I loved it. So yeah.
Just do it if you can! <3

(A couple more pictures below)

Pin me for later:

Oh yeah, if you’re sitting on the outside ‘edge’ of a bar, you might get unexpectedly soaked too. Just like this: