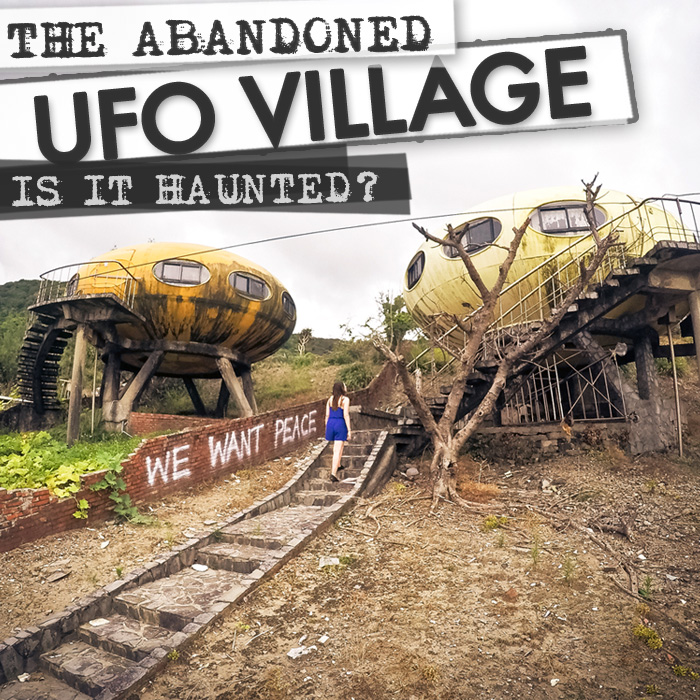 An hour away from Taipei, lies an abandoned resort known as the UFO Village.

This abnormal structure complex is based in Wanli, New Taipei City to be exact.

Spooky, strange and uncomfortable.. those are the feelings running through you when walking around.

From the very first point of entering the completely empty area filled with strange apartment pods known as Futuros (the UFO looking ones) and Venturos (the rectangularly shaped pods) a ton of questions start popping into your head.

This isn’t the most known or touristy place in Taiwan. In fact – not many people have heard of it and the ones that did, most probably believe it has been demolished. Many articles found online specifically state that the demolition took place in 2010.

To make things even more bizarre, there is no detailed (or confirmed) information stating why the complex has been built, other than what’s believed to be just a holiday resort.

There also isn’t any information explaining what happened and why it became deserted in the way that it did.

But let’s start from the beginning.

The Sanzhi Resort aka the UFO Village was built in 1978 – it was meant to be the perfect relaxing place aimed for the American military, right on the beach, nice surfing spot, unique (and strange) looking apartments, a swimming pool.. what else could you wish for.

During the two years of construction, mysterious and unexplained events occurred – including car accidents and even a suicide. Then all of a sudden, the village became completely abandoned. People just left, or disappeared.

Leaving everything exactly as it was.

Newspapers, cards and tea cups on the tables. Framed pictures, hanging t-shirts, unmade beds.. 40 years later everything is still there.

Entering the place already makes you feel uneasy – what looks like it should be a secured resort, shouts with emptiness. Walking around leaves you with the strangest feeling, and peeking through the windows of the apartments leaves you speechless.

So what happened? Why did people leave? Where did they go?

There are a few stories believed to be the reason for this abnormal occurrence. Some believe that the project has begun with a slow start due to funds, investors lost interest as they were wealthy enough to vacation in more exotic places.

Another reason is that the area used to be a burial site for over 70,000 Dutch soldiers, whose bodies were apparently dug out in order for the resort to be built.

The area also used to be home to an important ceremonial Chinese Dragon – who was destroyed for an easier access to the construction site. This is, of course, believed to be an extremely bad luck.

All in all, the place is believed to be haunted.

What shocked me the most were the online articles saying the resort has been completely demolished.

Apparently, the government decided to get rid of the buildings in 2010 even though there were many people protesting. They believed it will bring more bad luck to the area.

If it wasn’t for my friend who visited a few days earlier, I probably would have believed the (fake) fact that the complex is not there anymore.

But, oh it definitely is.

I found a great website stating many facts and documented visits. I found that the reason why the property is believed to be demolished is due to the planned construction of luxury apartments on the very same sight.

Originally, there were 13 Futuros along with a larger number of Venturos. However, four of them have disappeared, believing to be the beginning process of the demolition which has been put to a stop shortly after starting.

Strangely enough, it seems that a few of the pods have became occupied, right in the centre of the abandoned ones.

How to get there:

Bus 1815 from the Taipei Main Station or Taipei City Hall towards Yehliu. Get off at: 翡翠灣 (just before Yehliu Geopark) The bus takes less than an hour.

So what did really happen? Are the stories correct? Did people just got up and leave?
Where did they go and why did they leave everything exactly as it was?

The questions are endless.

Have you been to this UFO Village?
What are your thoughts on this?
Let me know below!

Here is my full vlog from the recent visit:

Hope you enjoyed!
Please share if you found it interesting <3

Here are some more pictures :

This is NOT the sanzhi UFO houses.

Thanks Anon, I’ve updated the article 🙂

Is this still here? My friend and I want to go there next weekend!

Hi Taylor,
Sorry for the late reply, I am pretty sure it’s still there! 🙂

Hello! Love the photos. If we take the bus, will it take awhile to get to the place?

Hey Jess!
The bus is very quick actually! Less than an hour from Taipei 🙂

Do you think it really is haunted? Looks very strange and creepy like you said.
Would love to visit it one day.

Not sure whether it’s haunted.. but it definitely feels surreal!
I couldn’t recommend visiting enough! xx

This place looks so creepy but interesting at the same time! Your photos are amazing. That’s so weird that there’s fake news to say that it’s been demolished… I wonder why that is?!